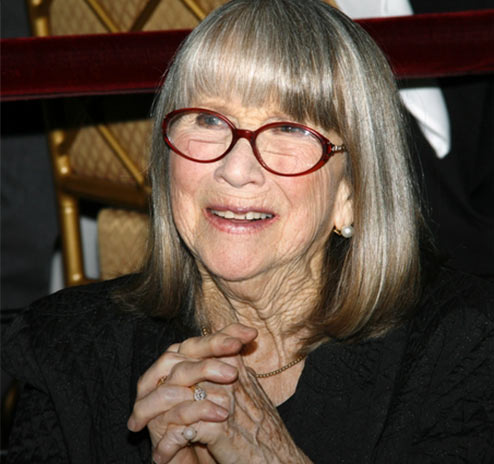 Julie Harris is the most honored performer in Tony history with ten nominations and six awards. She won the award as Best Actress for I Am A Camera in 1952, for The Lark in 1956, for Forty Carats in 1969, and for The Last of Mrs. Lincoln in 1973. In 1977 she won Best Actress in a play for The Belle of Amherst. Her five additional nominations were for: Best Dramatic Actress in Marathon ’33 in 1964 and The Au Pair Man in 1974; Best Actress in a musical in Skyscraper in 1966; and Best Actress in a play in Lucifer’s Child in 1991, and The Gin Game in 1997. Ms. Harris and producer Robert Whitehead were named the recipients of Special Tony Awards for Lifetime Achievement in the Theater in May of 2002. Elia Kazan, in his autobiography A Life, said that he was grateful to have Julie Harris on the set of East of Eden because of her calming influence on James Dean. Kazan praised Harris as both an actress and as a human being. Ms. Harris attended drama school at Yale, and made her stage debut in It’s a Gift in 1945. She made her screen debut in 1952’s The Member of the Wedding, in a reprise of her Broadway role. She earned an Oscar nomination for her portrayal of a young girl prodded into maturity by events at home. Since then Harris has won some twenty awards for her work on stage, screen, and TV. She lives on Cape Cod and often attends Elements Theatre Company productions.

“I have had the pleasure of knowing Danielle Dwyer and Elements Theatre Company for more than ten years now. Over the years I have watched this bold and skilled company embrace everything from Neil Simon to Anton Chekhov, and from reader’s theatre to fully-staged opera, with equally fantastic results in all of their performances.

As the company mission statement indicates, Elements Theatre Company is about more than entertainment: every piece they undertake explores the breadth of humanity — its horror, its loveliness, and its humor — with honesty. These actors hold up the mirror for themselves and in turn give us, the audience, the courage to look into that mirror too, and not shy away from what we find.

As a fellow actress on Cape Cod, I find a kindred spirit in Danielle Dwyer particularly. Her generosity and proficiency as both lead actress and company director shine, and it is clear that every production and every company member benefits and grows from her instruction, encouragement, and example. I have seen her as Everyman, Lettice Douffet, Eleanor of Aquitaine, Mephistopheles, Mrs. Erlynne, Queen Elizabeth, Liubov Ranevskaya – monumental roles – and her complete transformation in becoming each character pays full tribute to every single one.

If you have not seen Elements Theatre Company, I advise you to make the trip to Rock Harbor and experience this unique company for yourself. You will not be disappointed.”
— Julie Harris